This is the fourth pin in the 2015 Annual Passholder pin series of four pins at WDW which represent postcards.  The fourth pin features the Hollywood Studio and has Mickey & Minnie next to the Hollywood Studios Water Tower on the front. It slides open and reads: “It’s Lights, Camera, Action!” and is signed by the characters.  Pin closed is about 1.25″ H x 01.75″ W Max Dimensions.  Pin opened to 90 degrees is about 2.625″ H x 01.75″ W Max Dimensions.  #2 Posts with #2 Mickey Pin Backs.

Buy this Mickey Minnie Postcard Pin Disney Passholder New  to collect yourself.  Or give it to someone you know!

ANNUAL PASSHOLDER: COMMEMORATIVE COLLECTION – WALT DISNEY WORLD
This is the fourth pin in the 2015 Annual Passholder pin series of four pins at WDW which represent postcards.  Notably, the fourth pin features the Hollywood Studio and has Mickey & Minnie next to the Hollywood Studios Water Tower on the front. It slides open and reads: “It’s Lights, Camera, Action!” and is signed by the characters.

This listing is for one pin only, the Disney WDW Mickey & Minnie Postcard Passholder 2015 LE Pin New from this set.

From there, Mickey rapidly rose to the top of American culture.  In fact, The Mouse is the most popular and recognizable cartoon character in the world.  He’s since appeared in over 130 films and has received a combined 11 honors from the Academy of Motion Picture Arts and Sciences.  In 1978, Mickey became the first fictional character to get a star on the Hollywood Walk of Fame.

Minnie Mouse is the girlfriend of Mickey Mouse.  Notably, Minnie is sweet-natured and fun-loving.  Moreover, the comic strip story The Gleam by Merrill De Maris and Floyd Gottfredson first gave her full name as Minerva Mouse.  Thus “Minerva” has since been a recurring alias for her.

In some appearances, Minnie is presented as a close friend of Daisy Duck.  Noteworthy, her favorite hobbies are dancing, gardening, shopping, music and fashion.

In the late 1980’s, a team of Walt Disney Imagineers led by Marty Sklar and Randy Bright had been given an assignment to create two new pavilions for Epcot’s Future World section.  The brainstorming sessions led to Wonders of Life and Great Movie Ride pavilions.  The latter was to look like a soundstage backdrop, with a movie theater-style entrance in the middle.  Furthermore, the Great Movie Ride would have sat between the Land and Journey Into Imagination pavilions.  When newly appointed CEO Michael Eisner saw the plans for the pavilion, he requested a change.  Instead of placing the ride in an already existing park, it should be surrounded by a new park themed with Hollywood, entertainment, and show business.

In 1985, Disney and Metro-Goldwyn-Mayer entered into a licensing contract that gave Disney worldwide rights to use the MGM brand and logo for what would become Disney-MGM Studios.  Furthermore, Disney-MGM Studios included working production facilities for movies and TV shows and a satellite animation studio, which began operation prior to the park’s debut.  In 1988, MGM/UA responded by filing a lawsuit that claimed Disney violated the agreement by operating a working movie and TV studio at the resort.

On May 1, 1989, the theme park opened adjacent to the production facilities, with MGM’s only affiliation being the original licensing agreement that allowed Disney to use MGM’s name and lion logo in marketing.   Separate contracts that allowed specific MGM content to be used in The Great Movie Ride.  When the park first opened, the only two attractions were the Studio Backlot Tour and The Great Movie Ride.

Disney later filed a countersuit, claiming that MGM/UA and MGM Grand, Inc. had conspired to violate Disney’s worldwide rights to the MGM name in the theme park business.  In addition, the countersuit asserted that MGM/UA would harm Disney’s reputation by building its own theme park at the MGM Grand hotel and casino in Las Vegas, Nevada.  Finally, on October 23, 1992, Los Angeles Superior Court Judge Curtis B. Rappe ruled that Disney had the right to continue using the Disney-MGM Studios name on film product produced at the Florida facility.  Also, Judge Rappe ruled that MGM Grand had the right to build a Las Vegas theme park using the MGM name and logo as long as it did not share the same studio backlot theme as Disney’s property.

The 33-acre MGM Grand Adventures Theme Park opened in 1993 at the Las Vegas site and closed permanently in 2000.  The contract with MGM prohibited Disney from using the Disney-MGM Studios name in certain marketing contexts; in those instances, Disney called the park The Disney Studios.  In 1994, the park saw its first expansion; with the addition of Sunset Boulevard and The Twilight Zone Tower of Terror attraction.

The Rock ‘n Roller Coaster Starring Aerosmith had a grand opening on July 29, 1999, at Disney-MGM Studios.  Noteworthy, its track measures a whomping 3,403 feet. Also, the roller coaster features limousines equipped with 125 speakers, 24 sub-woofers and more than 32k watts of audio amplifier output power!  Talk about a booming experience!  Moreover, each of the cars play different Aerosmith songs.  Songs include: “Nine Lives”; “Love in an Elevator”/”Walk This Way” medley; “Sweet Emotion”; “Young Lust”/”F.I.N.E.” Other songs include: “Love in an Elevator” medley; and a “Back in the Saddle”/”Dude Looks Like a Lady” medley.

On August 9, 2007, Walt Disney World President Meg Crofton announced that the company would re-brand Disney-MGM Studios as Disney’s Hollywood Studios.  The name change was to be effective January 7, 2008. Then on March 12, 2015, CEO Bob Iger surprised the annual shareholders meeting.  Noteworthy, he hinted at another name change for the park coming in the near future.

Buy this Mickey Minnie Postcard Pin Disney Passholder New  to collect yourself.  Or give it to someone you know! 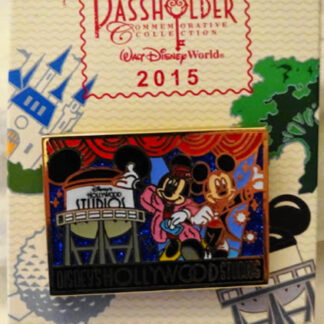