Buy this Disney WDW Parade Of Memories 2015 Passholder Pin Set #5 pieces New On Special Collector’s Card to collect yourself.  Or give it to someone you know!

This listing is for One New on Special Collector’s Card:

All the above dimensions are approximate maximum dimensions.

Firstly, this is a set of five pins.
Importantly, each pin represents a parade that is currently, or was formerly, in the Disney Parks.
Further, #5 Mickey icon pin backs, one for each pin.
Notably, part of the Annual Passholder Commemorative Collection Series.
In fact, Authentic Official Pin Trading 2015 Disney Parks & Official Disney Theme Park Merchandise.
Finally, @ Disney and Made In China.

Background For Mickey Mouse who is on 1 of Parade Memories Passholder Pins:

From there, Mickey rapidly rose to the top of American culture.  In fact, The Mouse is the most popular and recognizable cartoon character in the world.  He’s since appeared in over 130 films and has received a combined 11 honors from the Academy of Motion Picture Arts and Sciences.  In 1978, Mickey became the first fictional character to get a star on the Hollywood Walk of Fame.

Background For Minnie Mouse who is on 1 o Parade Memories Passholder Pins:

Minnie Mouse is the girlfriend of Mickey Mouse.  Notably, Minnie is sweet-natured and fun-loving.  Moreover, the comic strip story The Gleam by Merrill De Maris and Floyd Gottfredson first gave her full name as Minerva Mouse.  Thus “Minerva” has since been a recurring alias for her.

In some appearances, Minnie is presented as a close friend of Daisy Duck.  Noteworthy, her favorite hobbies are dancing, gardening, shopping, music and fashion.

Be sure to check with Walt Disney World as to current availability for each of these parades if you are planning a visit.

Share a Dream Come True is a wonderfully refreshing and energizing parade at the Magic Kingdom.  Indeed, snow globes are a favorite with many Disney fans.  So what better way to create a new parade but with snow globes as the floats?  The snow globes are acrylic and 8.5 feet in diameter.  In addition, the parade highlights many of our favorite Disney stories.  Surely, it has lots and lots of characters.

More than 110 cast members put on the parade daily at 3 p.m. from Frontierland to Main Street USA.  Importantly, members of the London Symphony Orchestra and the Royal Philharmonic recorded the music in London.

Main Street Electrical Parade is a nighttime procession in which glowing, spinning floats honor favorite Disney characters.  In fact, animated Disney films that are represented include “Alice In Wonderland,” “Cinderella” and more.  Moreover, Tinker Bell lights the way with a wave of her wand.  Noteworthy, she orchestrates half a million shimmering lights synchronized to a memorable soundtrack.

Mickey’s Jammin’ Jungle Parade is similar to other WDW parades, complete with floats, Disney characters, skaters, acrobats, and stilt walkers.  Characters are from The Lion King, The Jungle Book, and Song of the South.  Importantly, the parade starts and ends near the First Aid station on Discovery Island, between Pizzafari and Africa.

Tapestry of Nations was a parade at the Epcot theme that ran around the World Showcase Lagoon from 1999 to 2001.  Afterwards Disney rethemed it as Tapestry of Dreams.  The parade had a unity and world peace theme and featured a variety of large puppets and massive rotating drum units.  Notably, Michael Curry designed the puppets for this parade as he also did for The Lion King on Broadway.  Significantly, the leader of the parade was the Sage of Time.  The Sage represented as a stilt walker hose costume featured alchemy symbols, gold trim on a white robe, a staff, and a headpeace like a sun with a face.

Disney Stars and Motor Cars Parade was a parade at Disney’s Hollywood Studios at the Walt Disney World.  In fact, the parade first premiered on October 1, 2001 as part of the WDW’s 100 Years of Magic Celebration.  Noteworthy, the parade is a procession of characters riding in highly themed cars down the streets of Hollywood Studios in true Hollywood style.  The parade route from the gate next to Star Tours over to Hollywood Boulevard to next to the park exit.

A MUST FOR ANY DISNEY or ANNUAL PASSHOLDER COLLECTOR!!!

Buy this Disney WDW Parade Of Memories 2015 Passholder Pin Set #5 pieces New On Special Collector’s Card to collect yourself.  Or give it to someone you know! 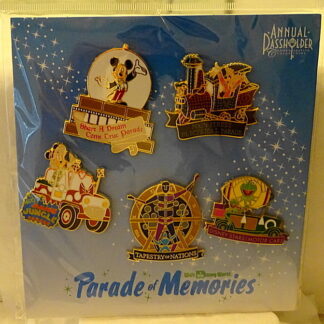