This Disneyana collectible disc ornament makes a great gift for yourself or someone you know.

About 3.5 inches in diameter.

Photos in this listing enlarged to show details.

Color of item you receive may vary from that shown due to different dye lots.

Box and ornament may have minor imperfections as sold new by Disney.

Box may have minor shelf wear including rips, tears, folds, and/or creases.

We are selling this item as a collectible, not as a toy.

SORCERER MICKEY IS RAISED AGAINST THE BACKGROUND. 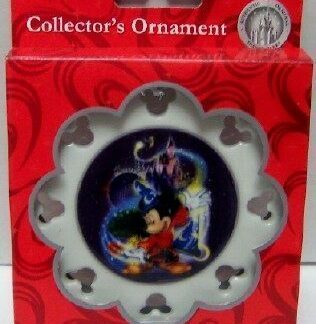