This listing is for one NEW

It was October 1, 1971, and Magic Kingdom turnstiles began to spin after three weeks of trial runs by nearly 100,000 selected guests from throughout Central Florida. Twenty-two park attractions opened, and 5,000 costumed cast members (employees) made their debut. Furthermore,  guests took a dive aboard 20,000 Leagues Under the Sea, flew through the air in flap-eared Dumbo the Flying Elephant cars and met the iconic film character who started it all – Mickey Mouse.

The Magic Kingdom premiere 40 years ago, followed three weeks later by a star-studded grand-opening event with Bob Hope, Julie Andrews and other luminaries, put Walt Disney World Resort on the map. More people talked about this destination than any other in the Western world. Certainly, no one then could imagine what it would become.

The festivities began right at the park’s entrance, where cast members gave guests commemorative 40th anniversary buttons and park maps (download link). At 10 a.m., a line of more than 50 Disney characters, including Mickey Mouse, Minnie Mouse, and the Seven Dwarfs, paraded down Main Street, U.S.A. to the tune of “it’s a small world (after all)”, and songs from previous park anniversary celebrations, including “Remember the Magic” from the park’s 25th anniversary.

Meg Crofton, president of Walt Disney Park Operations and president of the Walt Disney World Resort, welcomed the crowd at Cinderella Castle, and reflected on the park’s milestone, explaining that for Walt Disney, guests were – and still are – a key element in making a Disney theme park a magical place to visit.

Guests were then invited to accompany the Dapper Dans in singing “When You Wish Upon a Star.”

FIRST, PHOTOS IN THIS LISTING ARE DISNEY STOCK PHOTOS AND  WE ENLARGED THEM TO SHOW DETAILS.

Next, ornaments may have minor imperfections (nicks, dings, scratches) and/or  discoloration and/or toning as they are sold new by Disney with these imperfections.

Noteworthy, each Ornament Is Numbered But Number Of Item You Receive May Vary From Number Shown.

Surely, read this listing carefully, thoroughly and completely. Ask questions before buying so you are completely satisfied with your purchase. 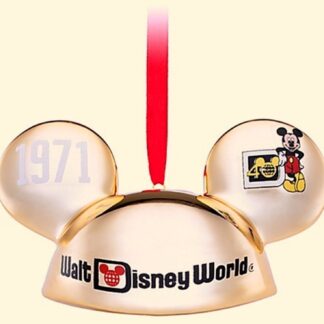