This listing is for one Brand New:

Captain America’s costume bears an American flag motif.  Also, he carries a durable shield he throws at foes.  Of course, the comics depict him as the alter ego of Steve Rogers, a frail young man enhanced by a test serum.  Then, near the end of WWII, he was trapped in ice but hibernates until he was revived decades later.  Indeed, Captain America often struggles to maintain his ideals from another time.  Even so, he remains a highly respected figure.  Finally, he becomes the long-time leader of the Avengers.

Marvel released “Captain America: The First Avenger” on July 22, 2011.  In fact, this movie deal with the early days of Steve Rogers that turn him into Captain America.

Firstly, Marvel wanted to introduce the concept of The Avengers with this film to help market their upcoming “The Avengers” film.  Indeed, the “first” refers to the fact that Captain America was the first of the super heroes who would eventually form the Avengers to make a public appearance.

Next, there was some concern that a film titled “Captain America” might not be seen as relevant in non-US markets, or even might hurt the film due to anti-American sentiment.  In fact, in Russia and S. Korea the film was released simply as “The First Avenger.”

ALSO, MAGAZINE MAY HAVE MINOR SHELF WEAR INCLUDING RIPS, TEARS, AND/OR FOLDS.

IMPORTANTLY, CHOKING HAZARD – NOT FOR CHILDREN UNDER 6.

SUPPLY OF THESE MARVEL CAPTAIN AMERICA MOVIE MAGAZINE IS LIMITED, SO TO AVOID DISAPPOINTMENT

Read this listing carefully and to ask questions before buying.  So you are completely satisfied with your buy. 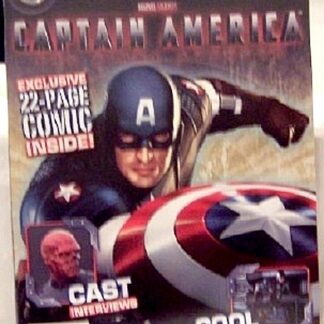