This is the first pin in the 2015 Annual Passholder pin series of four pins at WDW which represent postcards.  Notably, the first pin features the Magic Kingdom park.  Also, Cinderella and Prince Charming are next to the Castle on the front.  Pin slides open and reads: “Sending Magic Your Way!” and is signed by the characters.

Surely, buy this  Cinderella Prince Postcard Pin Disney Passholder New  to collect.  Or give it to someone you know!

ANNUAL PASSHOLDER: COMMEMORATIVE COLLECTION – WALT DISNEY WORLD
This is the first pin in the 2015 Annual Passholder pin series of four pins at WDW which represent postcards.  Notably, the first pin features the Magic Kingdom park.  Also, Cinderella and Prince Charming are next to the Castle on the front.  Pin slides open and reads: “Sending Magic Your Way!” and is signed by the characters.

This listing is for one pin only, the Disney WDW Cinderella and Prince Charming Postcard Passholder 2015 LE Pin New from this set.

Cinderella is a 1950 American animated film.  Importantly, Walt Disney produced the film.  He based it on the fairy tale “Cinderella” by Charles Perrault.  However, cultures all over the world include “Cinderella stories”.  Notably, this is the 12th feature in the Disney Animated Canon.

The American Film Institute selected Cinderella as one of the best American animated films ever made.  In addition, the Library of Congress inducted it into its National Film Registry in 2018.  Also, Disney released a live-action adaptation of the film in 2015.

The King organizes a ball in an effort to find a suitable wife for Prince Charming.  Every eligible maiden in the kingdom is summoned.  When Cinderella comes down in her new dress, her stepmother points out the beads and sash which she took from her stepsisters’ discards.  Angered by Cinderella’s use of their discards, the stepsisters viciously rip the gown.  Next, they snootily leave for the ball.

Cinderella’s Fairy Godmother gives Cinderella a new gown with glass slippers.  Her godmother warns her that the spell ends at the stroke of midnight.  At the ball, the Prince rejects every girl but Cinderella. The two fall strongly in love.  They dance alone.

Just before midnight, Cinderella flees to her coach and away from the castle.  Notably, she drops one glass slipper.  The Prince will not marry anyone except the owner of the slipper.  Thus, he sets out to find her.

After a royal search reveals that Cinderella is the owner of the glass slipper, Cinderella and Prince Charming celebrate their wedding and live happily ever after.

Many say that the true essence of Disney magic can be felt simply by stepping foot inside the Magic Kingdom. Opened in 1971, it has withstood a constantly shifting social climate and technologies.  Yet, somehow, the Magic Kingdom remains the undisputed king of theme parks.  Certainly, it draws more yearly visitors than any other.

The Magic Kingdom divides into 6 distinct lands.  Notably, they form a spoke-like formation.  The lands all meet at the top of Main Street U.S.A. in front of Cinderella Castle.  Importantly, the 6 lands consist of Main Street U.S.A., Tomorrowland, Fantasyland, Frontierland, Liberty Square, and Adventureland.  In addition, each land is themed to its appropriate title.

Back of pin may have spotting, toning, discoloration, and/or oxidation.

Surely, buy this  Cinderella Prince Postcard Pin Disney Passholder New  to collect.  Or give it to someone you know! 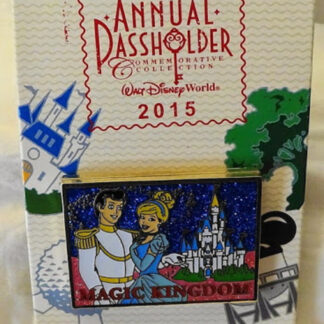