This Disney POP! Funko Dopey collectible makes a great gift for yourself or someone you know.

This listing is for one New In Box:

Funko’s niche is taking a beloved character and really trying to stylize and have fun with it.  The Disney Pop! idea was born through Funko’s PLUSHIE designs which are super stylized and simplified takes on beloved characters.   As Funko designed the plush, it became apparent that the design would also make a fantastic Disney mini vinyl line!

Box may have minor shelf wear as sold new by Disney.

These figures as sold new by Disney have minor scuff marks and uneven paint.

Colors of figure you receive may vary from that shown as dye lots vary.

Products may contain sharp points, small parts, choking hazards, and other elements not suitable for children under 12 years old.

Snow White and the Seven Dwarfs was America’s first feature-length animated film, as well as the first in the Disney Animated Canon.  It was also the first one in English and the first in Technicolor.  Walt Disney Productions produced the film and premiered on December 21, 1937.  RKO Radio Pictures released the film to theaters on February 4, 1938.  The film is an adaptation of the Brothers Grimm fairy tale, in which an evil queen attempts to have her stepdaughter, Snow White, murdered in jealousy of her beauty.  But she escapes and is given shelter by seven dwarfs in their cottage in a forest.

Many consider this film to be Walt Disney’s most significant achievement, his first-ever animated feature.

This listing is for one figure only, the Dopey Pop! Funko #340.

Collect all our Disney POP! Vinyl Figures by Funko, each sold separately.

This Disney POP! Funko Dopey collectible makes a great gift for yourself or someone you know. 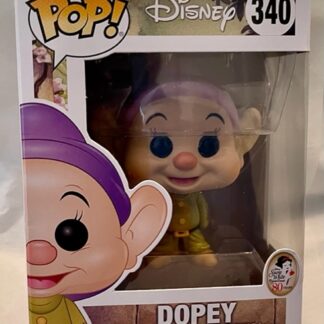