This coin shows a Sub-Antarctic Fur Seal, “Nightingale Island,” and “ONE CROWN”on the front.

Great addition for your world commemorative coin and/or seal collection!

This coin shows a Sub-Antarctic Fur Seal, “Nightingale Island,” and “ONE CROWN”on the front.

The Tristan da Cunha is home to two species of seal (pinnipeds or Pinnipedia), with several breeding colonies.  The two species are Subantarctic Fur Seals (Arctocephalus tropicalis) and Southern Elephant Seals (Mirounga leonina).  Having been overexploited by sealers in the 19th century, numbers are now recovering.

Sealers, mostly from the United States, hunted the seals at Tristan during the late 18th century and the 19th century.  Typically, a party of men was left on an appropriate beach with supplies and the necessary equipment.  They then proceeded to slaughter all the seals they could find – the fur seals mainly for their pelts, and the elephant seals mainly for their blubber.  Paintings by the Victorian artists Augustus Earle show a sealer flensing a young sea elephant, which involved skinning the animal and cutting the layer of blubber into large blocks.  These were then tied together and rafted out to waiting boats for transport to the try pots where the blubber was boiled down to extract the oil, and stored in barrels until the ship came back to pick them up.

Tristan islanders also took seals whenever they could, as the pelts and oil were good for trading with passing ships.  The German Stoltenhoff brothers, who attempted to settle Inaccessible Island, intended to make their living by sealing.  However, the earlier slaughter had been so great that the local seals had been hunted almost to extinction, which was a significant factor in the failure of their enterprise.

Sealing no longer takes place, and numbers have slowly but surely increased.  With Inaccessible and Gough Islands being designated UNESCO World Heritage Sites in 2015 and the plan to introduce of the islands’ marine protection area by 2020, particular efforts are being made to conserve the seal populations.

The subject of this coin is the Subantarctic Fur Seal.

The fur seal spends most of its time swimming in the open oceans hunting for food.  Fur seals feed on fish and plankton but are also prone to hunting squid and eels. The fur seal is often targeted prey for large aquatic animals such as sharks, killer whales, sea lions and occasionally the larger adult leopard seals.

Fur seals tend to return to specific beaches or rocky alcoves to breed which the fur seals do in the summer months.  The fur seal pups are sent into the water as soon as the mother fur seal is finished weaning them in order for the fur seal pups to learn how to hunt.  Fur seals are the most common seal species in Tristan.  There are breeding populations during the summer months on all of the main islands, and they may haul themselves out on most of the island beaches.  On the Tristan settlement plain, the fur seals camouflage themselves against the grey lava boulders.

For these reasons, Tristan da Cunha decided to commemorate the  Subantarctic Fur Seal on this coin.

This listing is for one coin only – the Mahi-Mahi coin.

PARDON REFLECTIONS IN PHOTOS DUE TO COIN BEING REFLECTIVE — YOU CAN SEE CAMERA LENS AND MY FINGERS REFLECTED ON COINS. 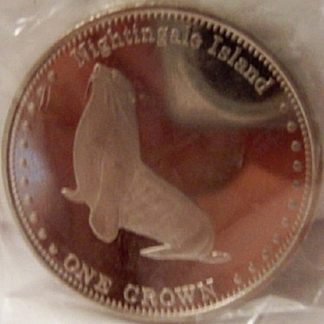