Fortune’s Fool (Нахлебник Nakhlebnik) is a play by Ivan Turgenev.

The setting is a vast Russian country estate where the resident aristocrats and their many servants are jolted out of their tranquility by the arrival of someone from the city, down-on-his-luck Vassily Semyonitch Kuzovkin, whose own property has been tied up for years in a hopeless lawsuit. At one time a “court jester” to the estate’s original owner, Kuzovkin remained in the house as a permanent guest following his master’s death.

Vassily is anxious about the impending homecoming of the heiress to the estate and her new husband, fearful that, having forgotten the warm relationship they once shared, she will expect him to move out. Wealthy neighbor Flegont Alexandrovitch Tropatchov, who disdains Kuzovkin and the poverty he represents, goads him into drinking too much at a lunch that culminates in his drunkenly revealing an unsettling secret that disrupts the lives of everyone involved and forces them to deal with the consequences of his rash action.

A century and a half after it was written in 1848, Fortune’s Fool was staged on Broadway for the first time in an adaptation by Mike Poulton. After 28 previews, the production opened on April 2, 2002 at the Music Box Theatre, where it ran for 127 performances.

Disclaimers For This Playbill Fortune’s Fool 2002: 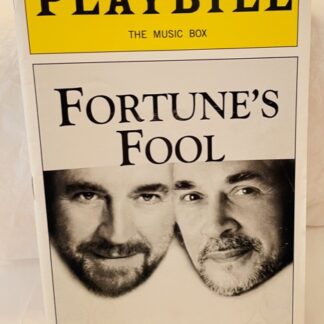