Playbill King and I 1997 Gently Used

Playbill From The 1997 Broadway Production Of Rogers & Hammerstein’s The King and I Gently Used.

This Playbill From The 1997 Broadway Production Of Rogers & Hammerstein’s The King and I Gently Used makes a great Broadway musical entertainment memorabilia collectible gift.

Product Description For Playbill King and I 1997 Gently Used:

Playbill
The 1997 Broadway Production
Of Rogers & Hammerstein’s The King and I.

Background Info For The King and I:

Origin of The King and I –

The King and I is the fifth musical by the team of Rodgers and Hammerstein. Margaret Landon’s novel, Anna and the King of Siam (1944), forms the basis for it. In turn, the memoirs of Anna Leonowens, governess to the children of King Mongkut of Siam in the early 1860s, inspired the novel. The musical’s plot relates the experiences of Anna, a British schoolteacher who is hired as part of the King’s drive to modernize his country. Conflict between the King and Anna marks much of the piece.  Noteworthy, there is also a love to which neither can admit.

The musical premiered on March 29, 1951, at Broadway’s St. James Theatre. It ran for nearly three years, making it the fourth longest-running Broadway musical in history at the time. It was an immediate hit, winning Tony Awards for Best Musical, Best Actress (for Lawrence) and Best Featured Actor (for Brynner). Costar Gertrude Lawrence died unexpectedly of cancer a year and a half after the opening. Thus, several actresses played the role of Anna during the remainder of the Broadway run of 1,246 performances.

A hit London run and U.S. national tour followed, together with a 1956 film for which Brynner won an Academy Award, and the musical was recorded several times. In later revivals, Brynner came to dominate his role and the musical, starring in a four-year national tour culminating in a 1985 Broadway run shortly before his death.

Christopher Renshaw directed major revivals on Broadway (1996), winning the Tony Award for Best Revival, and in the West End (2000). A 2015 Broadway revival won another Tony for Best Revival. Both professional and amateur revivals of The King and I continue to be on stage regularly throughout the English-speaking world.

Disclaimers For This Playbill King and I 1997:

This Playbill From The 1997 Broadway Production Of Rogers & Hammerstein’s The King and I Gently Used makes a great Broadway musical entertainment memorabilia collectible gift. 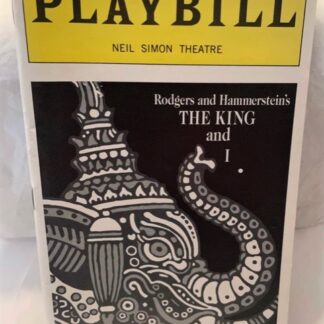