Great addition for your world commemorative coin and/or fish collection!

The swordfish is named after its bill, which resembles a sword.  Swordfish (Xiphias gladius), also known as broadbills in some countries, are large, highly migratory, predatory fish characterized by a long, flat bill.  They are a popular sport fish of the billfish category, though elusive.  Swordfish are elongated, round-bodied, and lose all teeth and scales by adulthood.  These fish are found widely in tropical and temperate parts of the Atlantic, Pacific, and Indian Oceans, and can typically be found from near the surface to a depth of 550 m (1,800 ft).  They commonly reach 3 m (9.8 ft) in length, and the maximum reported is 4.55 m (14.9 ft) in length and 650 kg (1,430 lb) in weight.

Contrary to popular belief, the “sword” is not used to spear, but instead may be used to slash at its prey to injure the prey animal, to make for an easier catch.  Mainly, the swordfish relies on its great speed and agility in the water to catch its prey.  It is undoubtedly among the fastest fish, but the basis for the frequently quoted speed of 97 km/h (60 mph) is unreliable.

Swordfish are vigorous, powerful fighters.  When hooked or harpooned, they have been known to dive so quickly, they have impaled their swords into the ocean bottom up to their eyes.  Although no unprovoked attacks on humans have been reported, swordfish can be very dangerous when harpooned.  They have run their swords through the planking of small boats when hurt.  In 2015, a Hawaiian fisherman was killed by a swordfish after he attempted to spear it.

Swordfish are known to frequent the waters near Tristan da Cunha.

For these reasons, Tristan da Cunha decided to commemorate the  swordfish on this coin.

This listing is for one coin only – the flying fish coin. 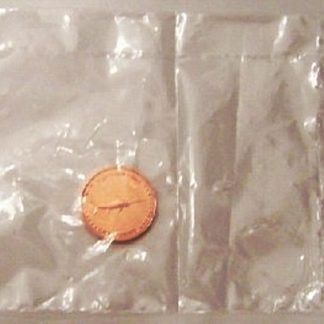