This collectible Disney WDW Mickey Band Postcard New makes a great gift for yourself or someone you know.

Magic Kingdom is the first of the four WDW parks.  It opened in 1971.

Cinderella Castle was inspired by the Disney film Cinderella.  This charming building is the symbol of Magic Kingdom park.  Indeed, Cinderella Castle welcomes you to a magical world where dreams come true.  Also, the 189-foot landmark boasts lofty spires and ornate turrets.  In fact, it is the gateway to Fantasyland.  Surrounded by a moat, the grounds offer an array of picture-perfect photo ops.  Surely, explore lush lawns, gardens and Cinderella’s own wishing well.

This collectible Disney WDW Mickey Band Postcard New makes a great gift for yourself or someone you know. 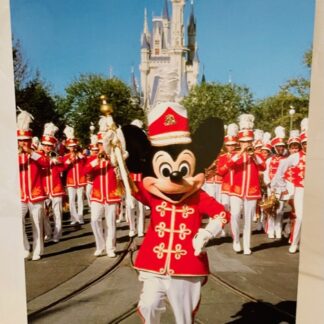